This month, we’re talking to mountaineer Dani Fuller about ambition, human endurance and living in the moment.

Dani lives in Hampshire with his family but spends a month of every year in France – and around four to five months climbing in Tibet and Nepal, home to the Himalayas. The Himalayan mountain range contains Earth’s highest peak, Mount Everest, and no fewer than ten of the world’s 14 biggest peaks – all over 8,000m above sea level and known as the eight-thousanders, with altitudes so high they’re affectionately nicknamed ‘the death zone’. In these awesome and scary surroundings, Dani leads group expeditions and teaches a ‘Glacier School’ with Summit Climb – rope-climbing, ice-axe techniques and camping in snow.

You know, there are warmer places on earth… so why mountaineering? ‘I’ve always had a passion for anything that involves being outdoors, especially endurance-based activities,’ explains Dani. ‘I started indoor rock-climbing at university, then moved on to outdoor climbing with friends. Multi-day treks/climbs and extended expeditions into the mountains were a natural progression. I feel most relaxed and at home there.’

So it’s uphill all the way? ‘There are challenges. My biggest is juggling my lifestyle with having a young family. Leaving them for long periods of time is the hardest thing in the world,’ says Dani. ‘But for me, when taking on a challenge, it has to be for personal ambition. I don’t climb for praise or to say what I have done; I do it for personal achievement – and [as a group leader] I also get a kick out of getting the most out of others. Being true to yourself makes the inevitable hard times more bearable.’

In the Himalayas, Dani has climbed Cho Oyu and Manaslu – the sixth and eighth-highest mountains in the world – multiple times. So what’s next on the bucket list? ‘I’ll be going back to Nepal for three months later in the year to climb Manaslu (8,163m), Mera Peak (6,476m), Baruntse (7,126m) and Ama Dablam (6,812m) – one after another!’ Phew.

At the time of our conversation, though, Dani was actually talking to us from a rather famous destination: Mount Everest. At 8,848 m above sea level it’s the world’s highest mountain, and Dani’s childhood dream climb. ‘But I turned it down a number of times,’ he says, ‘because reality doesn’t always live up to expectations. And there are inherent risks involved – I want to be there for my family. But it’s always been there in the back of my mind, nagging away, so when I was asked again to lead an Everest expedition [on the southeast route, approaching from Nepal, in May 2018], I finally accepted with great excitement and apprehension.’

After all this, we assume, he’s coming home to rest. What’s day-to-day life like in slightly less hilly Hampshire? ‘On weekdays,’ says Dani, ‘I wake up at 4.30am and go for a 50km cycle ride.’ Oh. ‘Then I help my children get ready for school and give them breakfast – their favourite is fruit crumble, made with gluten-free porridge oats. I walk my son to school, then go for a 10km run three times a week.’ Please tell us the other two days are rest days? ‘The other two days I jump on my Concept2 rowing machine. On the weekends, I’m up early for a four-hour cycle ride with friends, then a 10 or 25km run…’

We’re feeling distinctly lazy by comparison. Especially when it turns out that, just like us, Dani fuels his powerhouse routine with porridge. ‘I make it with water and a handful of sultanas to sweeten. Or I blend porridge with a ripe banana, two eggs and baking powder to make pancakes. Oats are so versatile and give long-lasting energy and, as I’m gluten-, lactose- and soya-intolerant, they’re an important part of my diet. Not only for breakfast, but I also bake my own granola bars for training. But with three children, they disappear fast!’

Does he adjust the breakfast routine when climbing? ‘Breakfast before a summit attempt consists of porridge,’ he tells us, ‘served with lots of fruit, which I dehydrate myself at home – this reduces the weight and increases its shelf life. Porridge is the perfect start as it’s hot, which is so welcome when it’s freezing all around. The fruit gives it a pleasant sweet taste and an explosion of different favours without adding any sugar, and slow-release energy that lasts for hours.’ Something we imagine is much-needed when a typical expedition can go on for 30 days.

Dani has had the privilege of some of the finest views on Earth. We’re eager to know his favourite. ‘Alaska,’ he replies immediately. The scenery is just breath-taking, and so humbling. If you truly wish to feel and see the full force of nature, and nature’s raw beauty, I can’t think of many places better. The locals are some of the nicest and most helpful people I have ever had the pleasure to meet.’

For those inspired to, ahem, climb ev’ry mountain – but are perhaps not quite ready to conquer Everest – Dani has some words of wisdom guaranteed to get you out and about and into the great outdoors. ‘For me, climbing is about achieving one’s own personal goals and seeing just how far I can push myself. But it doesn’t have to be the biggest [peak] or the most remote [destination]. All that’s irrelevant. It’s about enjoying the moment: some of the most memorable moments for me are in the UK, out hiking with my family. There’s so much on our own doorstep.’

‘I am forever amazed just how far the human body can be pushed,’ he adds, ‘even when your body is totally worn out and you are on your knees. But if you are strong of mind, you can still get up and push on.’ That’s it, we’re buying some walking boots.

To get your climb on, visit summitclimb.com 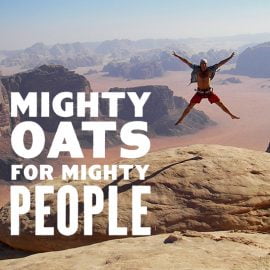 As part of an inspiring new story series, Mornflake has been talking to mighty people... 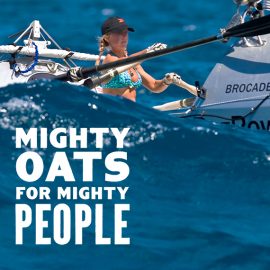