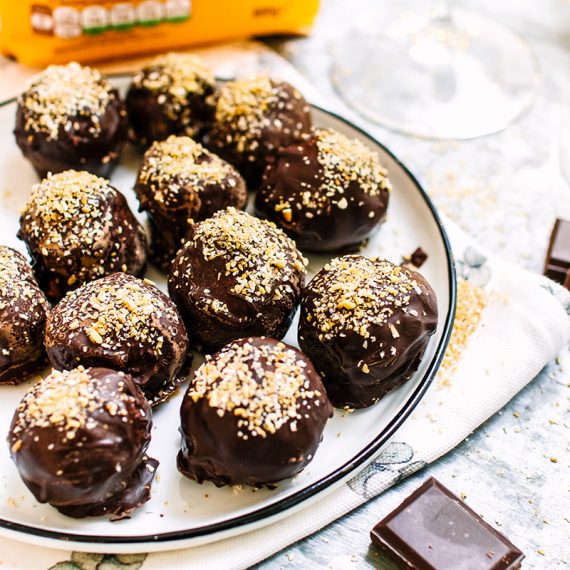 These rich and decadent chocolate truffles melt in the mouth, made with a touch of prosecco and deliciously toasted oatbran. It’s the Christmas combination you might not expect, but will instantly love. 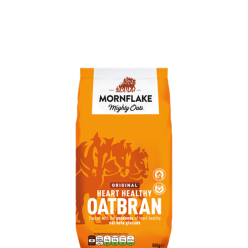 Toast the oatbran in a dry frying pan over a medium heat for a few minutes until it starts to turn golden. Move the oatbran around the pan to prevent it from burning, then remove from the heat. Set a small handful of the toasted oatbran to one side.

Finely chop the chocolate and add it to a small glass bowl. Pour over the boiling water and stir until the chocolate has melted and is smooth. Add the prosecco and toasted oatbran and stir thoroughly to combine.

Put the ice cubes into a larger mixing bowl and sit the small bowl with the melted chocolate in it on top of the ice. Stir the melted chocolate continuously – this will take a few minutes but keep stirring as it will suddenly thicken. Then remove the chocolate bowl from the ice as soon as it starts to thicken – it should be just thick enough to mould into round truffles. Note – if the chocolate thickens too much, melt it in the microwave at 600watts in 20 second increments, until it is malleable.

Take a heaped teaspoon size of the truffle mix and using your hands roll it into a ball. Set the truffle on a lined plate. Repeat this process with the remaining chocolate. When you have made all the truffles place them in the fridge to chill.

Meanwhile melt the 70g of dark chocolate with the coconut oil in a small bowl for the truffle coating. You can either melt the chocolate in the microwave or in a bain-marie. Once melted stir well.

Store in an airtight container and eat within 4 days.