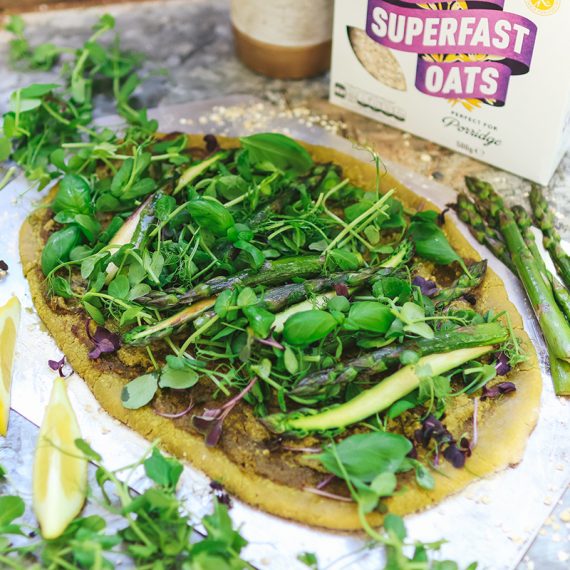 You’ve tried cauliflower pizza, now there’s a healthier gluten free base made with blended oats! You can top with all your favourite ingredients, we like ours with basil pesto, pan-fried asparagus and pea shoots.

For the pizza base

8 asparagus spears, sliced in half & pan-fried

2-3 handfuls of pea shoots or rocket Weigh out the oats and using your blender or food processor and blend them into a flour.

In a large mixing bowl add the flour, oat flour, yeast, salt and olive oil. Slowly add the water and combine until the mixture binds together to form a dough.

Turn the dough out onto a lightly floured surface and knead for 5-10 minutes until the dough is smooth. Shape the dough into a ball and return to the large mixing bowl. Cover with a tea towel and leave to rise for an hour.  It won’t have the same rise as a dough made with just flour, but it will increase in size.

Either divide the dough into 3 to make small pizzas or make one large pizza. Roll the dough onto a floured surface into circles or ovals. Place the pizza base onto a flat baking tray. Lightly spread a couple of spoonful’s of pesto onto the base and place in the centre of the oven and cook for 14-16 minutes until lightly golden around the edges.

While the pizza is cooking, halve the asparagus spears and pan fry them over medium heat until lightly charred.

When the pizza is cooked, remove from the oven, spread with another layer of pesto, add the cooked asparagus, pea shoots and basil leaves. Serve with a squeeze of lemon juice and a drizzle of extra virgin olive oil.